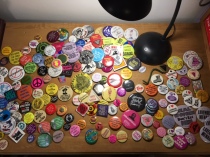 On the day of the Women’s March several weekends ago (Jan. 21), I didn’t want to be responsible for carrying a sign around all day, so I went to my trusty “Button Boxes” to see what I could dig out. I carefully selected 4 buttons to put on my jacket:

Most of my buttons are not recently acquired. With the exception of two brought to me by a friend from the recent DNC convention [Wicked Jezebel Feminist, and #She’s with us, Planned Parenthood], most of my buttons are circa 1970 – 1990s. I’m sure many of them are still available through catalogues like Syracuse Cultural Workers or Northern Sun Merchandising, or from radical bookstores and community centers. But then I started to think about how continuously timely these buttons are.

ntinue on my mission to go through all my memorabilia (refer to Essay #1), I gathered three full cookie tins/boxes of buttons. I chuckled because a couple of the buttons are from my childhood – a Heinz pickle pin, a smiley face, and a “Spiro our Hero” protest button with Agnew in Mickey Mouse ears. My favorite one, though, was a button I received from the World Book Encyclopedia saleswoman who came to my 5th grade classroom — “We Never Guess, We Look It Up.”

As it turns out, that was a mantra that guided most of my formative educational years. I typically looked beyond the encyclopedia, though, and I continued to follow that challenge even today! I wish other people would do the same.

I found that even though I rarely wear buttons anymore, the ones I’ve collected are loaded with memories and stories of actions and activities. Those buttons, TOO many of them, are sadly still relevant. And I found a sash I had made for them. I think it was part of a Halloween costume — or maybe one of my stage performances— where I presented myself as a lesbian movement radical. It mimics a Girl Scout badge sash and was intended to show all the viewpoints, activities, and accomplishments I collected over time. The sash is bright purple (lesbian), and claims membership in Troop #13 (coven) of the Amazon Nation (feminist/lesbian). Of course, I included my Girl Scout pins with the always-relevant motto to “Be Prepared.” Because they are pins, I can move them around as event and necessity dictates.

My button collection generally falls into 5 categories of topics: Woman rights and feminism, lesbian and gay rights, peace (anti-war), books and publishers, and a broad range of social justice/anti-oppression movements. Some of the buttons are generic and widely available, such as “Fight Racism,” “I © Lesbians,” “Bread Not Bombs,” or “You Can’t Beat a Woman.” But many of them are quite unique and conjure up specific stories and memories for me. It is these stories I want to tell because they are part of my herstory as well as about times that others may not know or remember. These are critical chapters in my life.

There’s one set of buttons that reflects my journey from fervent pro-life Roman Catholic (RC) woman (Love Life) through radicalism as a participant in the Women’s Ordination Conference (WOC) and finally to ex-Christian, paganism, and now into a freeform spirituality that borrows/integrates from multiple traditions. I was active during the very beginnings of WOC in 1978-1980, having attended the conference in Baltimore and participating in the local group in Detroit where I lived at the time. While I had been aware of feminism and the fight for women’s rights generally, I had been not really embraced them as my own. [As a sidebar, that trip to Baltimore was pretty wild for me because I was traveling with my “girl”friend on whom I had a major crush and spent time visiting my very RC Baltimore-based family who had no idea why I was in town!]

Participation in WOC (as a young 22-year-old) was one of several transformative awakenings to intersecting oppressions. It also precipitated one of my first explicit political actions. One strategy of WOC at the time was to encourage women to attain seminary degrees in order to be prepared for ordination should the day come. I was already a Campus Minister working at a Jesuit university and wanted more ministerial training. I wasn’t going to get accepted into a Roman Catholic seminary, so I decided to go to Yale Divinity School for a Masters in Divinity—a non-denominational equivalent. To support my efforts, I received a (very) small scholarship from WOC to pursue my studies.

Here’s the thing. I remember having a keen sense of justice and moral indignation at a very young age—but I had no vocabulary or mentorship to make sense of injustices I saw around me. At the age of six, I knew that boys had more privileges than girls so I held anger and resentment. At ten (being the oldest of 7 kids), my pre-lesbian self-consciousness had decided I didn’t want to have children, so I didn’t need to marry, so I didn’t need to date boys (whew). At 13,

with the assassination of Martin Luther King and the race riots of Baltimore, I couldn’t make sense of why my family members and neighbors hated black people so much and I “knew” their mean-spiritedness was just wrong. And having always been tormented for being a fat girl, I hated unwarranted name-calling and labeling based on inaccurate stereotypes.

I’m so grateful for my time at Yale. There I soaked in liberation theology, explored the writings of Mary Daly and other feminists (some Christians), and met feminist witches. I remember standing in the lunch line one day wearing my “Question Authority” button. A white, protestant man turned and gave me quite a self-righteous earful and challenged how I, as a future minister, could/would possibly dare to encourage people to think or to question authority. Additionally, who was I to be questioning the authorities? This was one of many instances bringing me to empowerment. In short-order (2 years), I went from being a devout Catholic almost nun/priest to being a radical feminist lesbian witch. I was also increasingly working with anti-nuclear groups and gay and lesbian activists and anti-KKK groups. I was becoming radicalized to left politics and realized that my childhood instincts towards questioning violence in the name of Christianity and desire to seek justice, kindness, and equity had finally found language, support, home—and expression through movements and creative activisms. And buttons! 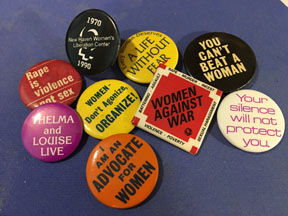 Yale is located in New Haven, CT, which was a hot-bed of feminist activism in the 1970s and into the 80s. I arrived in 1980, just at the wake as much of the activism was passing. But my buttons provide many reminders of what was still happening in the years I lived there. I was learning more about feminism but I was also learning what it meant to have courage

, be brave, and use my body as well as my voice. Part of that time, I volunteered as an intern and then on the board for the battered women’s shelter and learned about the fear, pain, and poverty experienced daily by women terrorized by generally male perpetrators.

During that time, I was more actively coming out as a lesbian when caution was still fairly necessary. Before the days when rainbows became popular, politicized lesbian and gay folk would speak in code as a way to recognize each other without being too blatant.

I’d wear a black triangle pin or a labrys (or labrys pinkie ring or bandana) as symbols to convey recognition. Sometimes, I’d use the buttons with words, still containing euphemisms such as Don’t Die Wondering, I Know You Know, Amazon, and Lavender Menace.

As I became more confident, the buttons became clearer and stronger. Some spoke to specifically political perspectives while others had more sexualized overtones. Being a bit shy about my own sexual proclivities, I wouldn’t wear those in public much. But I loved the humor of “No little Dutch boy is going to plug this dyke” or “Lesbians united in armed snuggle” or the very brazen “Real women don’t eat men.” 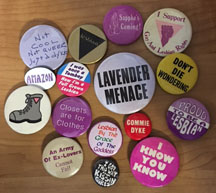 As I look fondly over these buttons gathered throughout the years, there’s one in particular that was handmade in limited quantity by a friend circa 2001. It contained a simple statement speaking volumes: “Not cool, not queer, just a dyke.” This button spoke to the anger and distancing experienced by older feminist lesbians as the landscaping changed from the struggles of the 50s, 60s, 70s into the pride, visibility, new developing language being claimed in the 1990s and beyond by younger gender radicals. We did not embrace the word “queer” as it generally spoke to this new generation who seemed particularly anti-feminist (even woman-hating). And we certainly did not feel cool. We were just old-time race and class sensitive women-centered dykes still seeking the clarity of vision and politic in lesbian-identified spaces.

Perhaps the largest sets of buttons are those declaring peace and justice related to all kinds of social activism. During the 1980s, one political group in particular inspired my activism and hope. Based out of the New Haven Women’s Center, the group first started as FUANTF – Feminists United Against Nukes Task Force. Over time, the group evolved into the Spinsters Opposed to Nuclear Genocide (SONG). [As a sidebar, I remember there was a sister group in Hartford, CT called Dykes Against Nuclear Crimes Everywhere, so when we acted together, we were SONG & DANCE.]

The Spinsters, as we affectionately called ourselves, was a wildly creative activist group where we discussed, proclaimed, and acted upon the deeper connections of racism, sexism, classism and genocide in relation to the proliferation of nuclear madness. We handmade many of our own buttons to broadcast whatever we were doing in the moment. In addition to targeted protests against “Electric Boat” (a General Dynamics nuclear sub building plant in Groton), we also protested US-backed interventions in Central America, spoke out against the Klan, supported the Puerto Rican ind 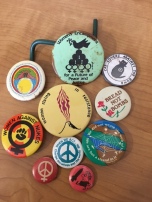 ependentistas, rallied with organized labor strikes against Yale University, participated in various feminist and lesbian-gay rights marches, and camped at women’s peace camps in England, Germany, and Seneca, NY. Among the buttons, I also found a piece of green wire cut from the fence at Greenham Common that one of my friends brought back for me.

Those actions brought many other buttons into my chesty conversations. One I wore most frequently was the always—and even more so now—contested notion of “Politically Correct.” Perhaps an essay for the future will focus on what this phrase has meant to me over the years. In general, though, I take it as 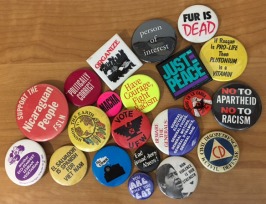 a badge of always speaking as an ally for those who are disenfranchised and FOR equity and justice across all peoples, beings, and the planet, which is generally antithetical to capitalism/industrial-corporate interests, individualism, and the prison-military complex. Some of the buttons were only worn in specific moments such as the Not in Our Name Acton on Wall Street in 1984, March on Washington in DC in 1897, or the National Lesbian Conference in 1991. ALL of these buttons remind me of my ever-evolving understanding of what it means to have the courage, conviction, and intention to continuously combat multiple injustices while remembering that they are intricately woven together. 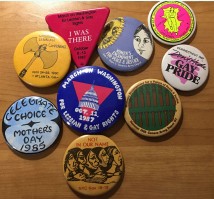 There is a badge I’ve seen that states “Wearing badges is not enough.” This is true now as it ever was. But I look fondly over my collection knowing that the phrases and images they contain express my awareness, anger, humor, diligence, indignation, pride, beliefs, emerging consciousness, solidarity, activism… and hope. Slogans — whether they are on a button, bumpersticker, poster, hat, sign, or t-shirt— have the power of language and support our empowered and emboldened spirits. As I age, I can even more solidly claim the clever wittiness of being a Revolting Hag. I embrace the multiple entendres of “spinsters on the rampage.” I am Woman. I am Lesbian. I believe that we as committed citizens can make and be the change we want to be. And I remain impossible. 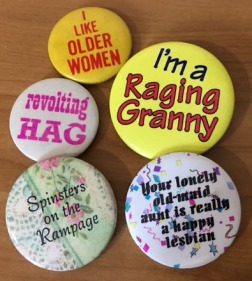 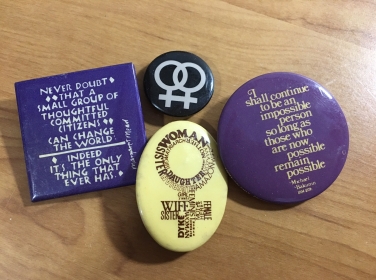